It was just an impromptu afternoon excursion with friends, a hike into the waterfalls on Memel Creek.

It would be hard walking; although fields were bare, forests were still thick with grainy cornmeal snow…in some places hip deep. In fact, I hadn’t been on a trail for weeks as my carefully groomed path no longer supported me, and the snow was too heavy and wet for snowshoes. But the forecast warned of two days of snow over Easter (and it was right!), so I wanted to take advantage of an outing before the fresh snowfall.

Armed with gators and trekking poles, we hiked partway, following a groomed snowmobile trail that provided good firm footing. But, once we stepped off the trail to cut through the woods and follow the creek, the snow was uncertain, sometimes holding our weight, other times giving way.

We lumbered along, stepping carefully and consciously; often what appeared firm collapsed or boots caught in covered underbrush and tangled in hidden bent saplings. However, we navigated to the swollen creek and falls without incident. 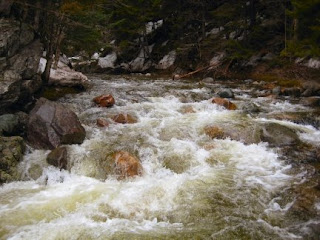 The noise and power of the spring runoff, surging around granite outcroppings and thundering off the precipice somehow quieted our group and each of us wandered alone for a bit to enjoy the surroundings.

The guys, of course, had typical guy fun. 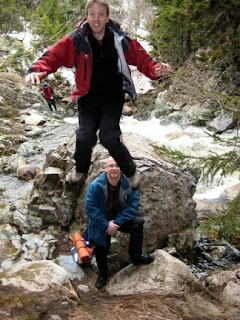 Later, we heated water for hot chocolate and munched on sandwiches, fruit and cookies, appreciating the cold, clear tumble of water, the musky smell of damp earth, the joys of a first spring outing and easy friendships. A broken birch branch dripped sap slowly…but with steady rhythm…the heartbeat of trees.

We agreed that a life without nature would be empty, like a sky without stars. 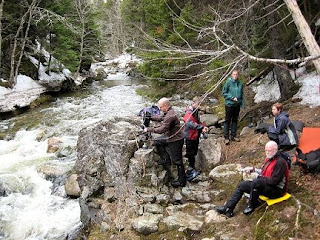 The excursion reminded me that too often we are inclined to stick with what we know…the well-traveled paths created by others…easy known routes that are laid flat and firm. 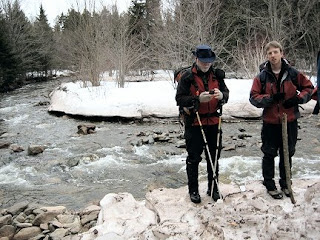 But when we allow a sense of adventure to lead us off the easy route…to make our own path… as uncertain as the terrain may be, we are often courted by the unexpected, challenged by the unanticipated and graced by the uncommon.

And making that journey with friends brings closer ties and even greater reward.