I’ve had to laugh when I’ve visited other blogs lately and seen comments about spring and warm weather. Sometimes it’s easy to forget in this global blog world, we don’t all live in the same climate zone. Here, in Atlantic Canada…we just enjoyed a wonderful winter snowstorm that dumped about 20 cm in our yards. Spring is a long way off.

After a particularly bitter cold snap, I’m just beginning to enjoy winter! A week ago, following an ice storm that lay down a solid sheen of glass, the marsh surrounding my village gleamed like calm water. Small dips and lines of brush caught drifts of snow, rolling them like waves on the beach. I’m always amazed how nature finds ways to mimic itself… 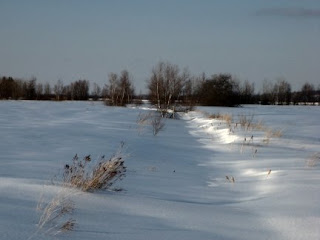 During my walks on the marsh, I often dwell on what life must have been like for those who came before. I happen to live in one of the first villages settled by Acadian pioneers back in the early 1700’s. Upon arriving on the Atlantic Coast in the early 1600’s, the Acadians settled in the Annapolis Royal area of Nova Scotia, then gradually moved up the Bay of Fundy.

Three families – Thibodeau, Blanchard and Gaudet – seeking land for themselves and their descendants, sailed a small boat further up the bay to the areas now called Riverside-Albert,Hillsborough, and Memramcook. They were drawn to this place by the wide,grassy,salt marshes,similar to those of their homeland in France. Hillsborough was originally called Blanchard’s Village for the family who settled here.

Twice a day, the tide covered these marshes, leaving behind algae and nutrients to enrich the soil. Like they did in Nova Scotia, as well, the Acadians of Blanchard’s Village built a series of dykes along the edges of the marsh to keep out the tide, making the land suitable for crops and animals. They lived quietly here, until the Acadian Expulsion of 1755 when the British, fearful of rebellion, packed them on ships and sent them back to France or down the eastern seaboard to Louisiana. 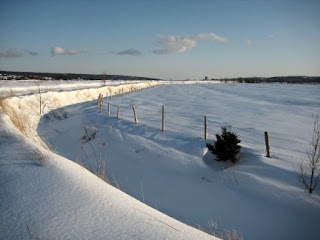 When my German ancestors arrived a decade later, they rebuilt the dykes that today, I walk upon. The wide ridges curve in serpentine fashion, separating the high water of the Petitcodiac tidal river from the flat farmland now used for grazing cattle and growing fodder crops. 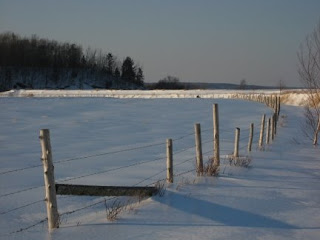 Their lives were so much harder than mine…I wonder if they ever paused to idly walk upon these same dykes…just for the sheer joy of it all.

Somehow, I am sure they did.

Posted under connection to place,memories,seasons,trails
Comments (9)