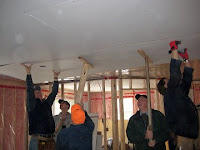 The end is in sight for the Gifts from the Heart house-building project. It has taken a very busy, very hectic, six months to make this home a reality. But, if all continues as planned, the house should be ready by the end of February!

There were times that things went well; other times, it was frustratingly slow.

Sometimes people promised to help, but never showed up. A few delayed the process by their hemming and hawing until we finally had to find someone else.

But then help would come from an unexpected source. The pieces would fall into place. And all was well again…just a little later than hoped. There were several faithful and very dedicated helpers who showed up day after day to help – taking time from the busiest season of the year, to work in the bitter cold.

Throughout the winter and into the new year, there may have been as few as one, or as many as six men, at the house on any given day, working on the interior. Power wasn’t hooked up until mid-January. The volunteers ran equipment off a generator for three very cold months.

But through it all, there were moments of miracles – helpers and money appeared when needed or businesses offered to cover extra materials. 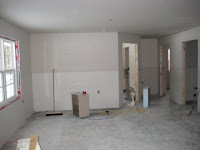 As Charlotte picked out her flooring, countertops and paint, she was beginning to finally envision how it would come together.

The Allen’s vehicle had transmission problems in December and they were without transportation for several months. It wasn’t repaired until the end of January, so until then, Jay had not been able to see his new home take shape. The wallboard was on the walls before he finally got to enter his new house.

“Awesome”, he said, grinning, as he and his wheelchair sat in the space reserved for his ‘drive-in’ shower stall.

It has been a roller coaster of a ride, but through it all, the dedication of the workers and the generosity of strangers has touched everyone involved.

Little mini-miracles have been commonplace, leading us to call it, “The God Project”. It seems obvious our ‘contractor’ has a handle on the plan.

If you are one of these mini-miracles who played a part in this project; we wish to thank you from the bottom of our hearts. It’s not over yet, but the end is near, thanks to your help and support.

Anything is possible, when you put your mind – and your heart – to it, and then step out in faith.

Posted under Gifts from the Heart
Comments (1)

One Valued Thought on Frustrations & Miracles