What if we had our own Dirty Dozen right here in Hillsborough?

Some days it seemed like it might never happen…but early this morning, as the sky began to brighten and a few flurries coasted down to earth, 12 very capable men congregated at a barren building site on the Mollins Road, just outside Hillsborough village limits. It was –7 with a cold winter wind, but they didn’t seem to notice. 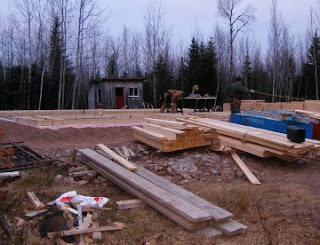 They laughingly called themselves the Dirty Dozen and they were there for a single purpose – to build Jay and Charlotte a new home. 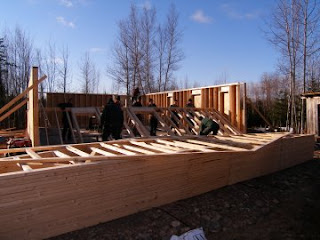 Planning started in September and slowly the pieces came together, local businesses jumping in to contribute building materials for this worthwhile project, tradesmen offering their services, individuals donating funds and labour to build a barrier-free home for the couple. It’s amazing what can happen when a village works together. 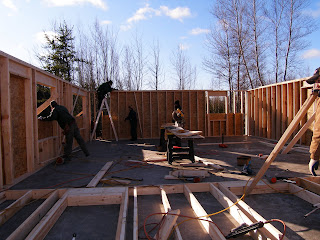 Today, it finally became real for Charlotte, who was on site, snapping pictures and almost dancing with excitement.

“Jay and I are going to grow old here,” she told me, standing under the overhang that will be her veranda. It’s not even a dream come true for her, because she never dreamed she would ever have a real house to call her own. 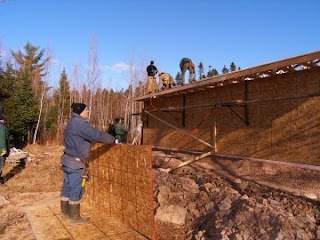 A few months ago, they didn’t know what the future held for them. All they knew was that they couldn’t stay in their mobile home for another winter. It was falling down around them.

Charlotte looks away, quiet for a few minutes, eyes hidden by sunglasses. It’s been an overwhelming ride for them. “Sometimes,” she says, “we just cry together.” 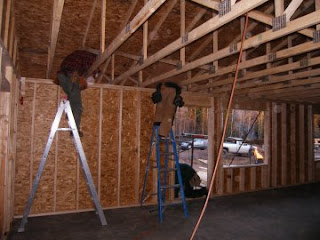 It was amazing how fast the house came together. At 8:00 this morning, a small storage shed and a slab foundation on a gravel base was all that could be seen on the site where the mobile home once stood.

An hour and a half later, two walls were standing; by 11:00 am all four walls were in place.

The Dirty Dozen were pumped. They wanted to see how much they could get done in a single day. By the time the guys broke for lunch, the roof trusses were positioned. 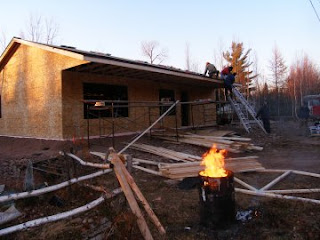 By 4:30 pm, they were shingling the roof, but had to stop when the shingles started breaking in the cold temperatures. Before they left for the day, they installed the doors.

Anything is possible, when you put your mind and your heart into it.

Posted under Gifts from the Heart,Matters of the Heart
Comments (1)

One Valued Thought on What if we had our own Dirty Dozen right here in Hillsborough?